The History of Champagne in Sports Wins 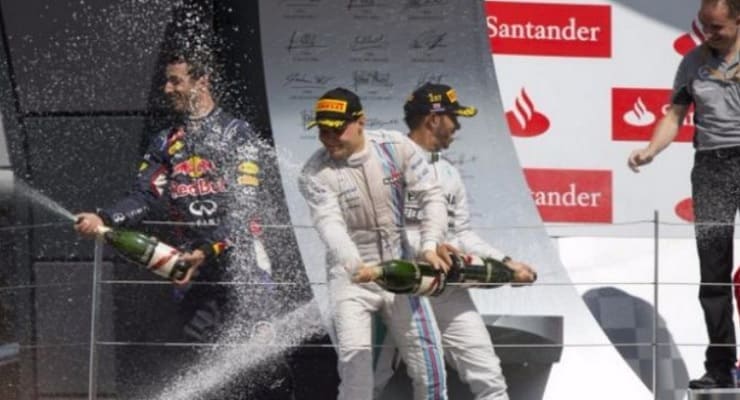 Anyone who watches sports will know the scene well: the victorious team or individual takes center stage applauded by the cheering crowd, Champagne corks pop, and a fountain of golden bubbles are sprayed in a show of jubilation. Sports wins have been synonymous with Champagne since fans can remember, a coveted prize gifted to winners of major titles, usually along with a trophy. So just how long has this tradition of celebrating with Champagne been around for?

Legend has it that Champagne was originally invented in the 17th Century by a French monk named Dom Pierre Perignon. Dom Perignon was also a winemaker, who was in search of ways to eliminate the bubbles that appeared in his wines when he discovered that the English aristocracy actually had a taste for them. Champagne then became a super trendy drink among the wealthy circles, and, by the nineteenth century it was regularly used to commemorate special occasions; from the maiden voyage of a ship to the marriage of two people.

It is thought that the tradition of Champagne celebrations in sports was introduced in the 1930’s, when Champagne merchant Count Frederic Chandon started offering bottles of bubbly to the winners of the French Formula 1 Grand Prix. The prestigious racing events were held on the famous Reins circuit in the heart of the Champagne district, and the carefree Count regularly attended, lavishly gifting Champagne during the celebrations.

Dan Gurney invented Champagne spraying on the victory podium at Le Mans in 1967, he placed his thumb over the open bottle, shook and intentionally sprayed the onlookers, thus beginning a tradition that has transcended all sports.

From basketball to tennis, Champagne is now a widely-accepted means of celebration. With 258-year-old Champagne Lanson securing another 5-year partnership with The Championships at Wimbledon, the use of Champagne in tennis is certainly here to stay. Their partnership has already lasted 41 years and is set to continue for the foreseeable future at least.

The camaraderie of Champagne celebrations has also been seen in baseball since the Milwaukee Braves won the World Series in 1957, but the spraying of the beverage didn’t become a tradition until the 1960s. It is thought that this part of the tradition started in 1960, when the Pittsburgh Pirates won the NL pennant and the World Series, and Champagne was splashed around the clubhouse in celebration.

European football has long used Champagne to celebrate wins. From Real Madrid spraying Carlo Ancelotti after their UEFA Champions League victory in 2014, to Leicester City spraying manager Claudio Ranieri in the press room following their Premier League triumph in 2016; Champagne is an important part of football victory. When it comes to the man of the match, however, things have changed somewhat. Champagne is no longer awarded to the best player in the game, as this was replaced by a gold Barclays trophy in December 2012. With odds-on for a lively season ahead, players will need to remember that they are playing for a trophy rather than the chance to spray their manager with champers!

Even the quieter sports, such as cricket and golf have been known to partake in jubilant Champagne celebrations.  From John Daly’s iconic PGA Tour Champions win in 2017, to England beating India to win the series, Champagne is just at home in these sports as the rowdier ones.

This all goes to show that the marriage between sports and Champagne is a long and illustrious one that is unlikely to end in divorce any time soon. Which is good news for the Champagne region at least!