Everything You Need to Know About English Sparkling Wine

If you are thinking “England makes wine???”, you’re not alone. Many people ask this upon hearing that wine is not only produced in England, but the grapes are grown in English vineyards, too.

To put this question to rest, let me confidently tell you that all ‘English Wine’ is produced in England from grapes grown there.

England’s wine scene has been steadily increasing over the past decade; now there are over 133 wineries and more than 500 commercial vineyards producing some high-quality and award-winning wine, especially sparkling ones. 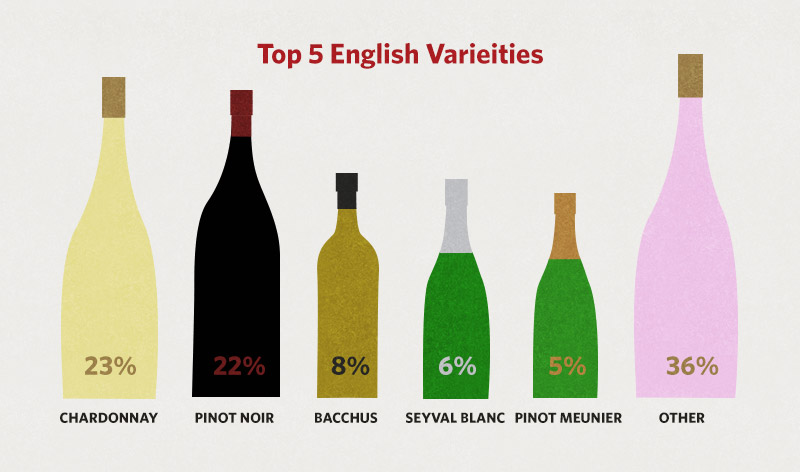 At only 10% of production, red and rosé wines are the least common. There are exceptions, but for the most part, the cool climate makes it difficult for red grapes to produce full-bodied still wines. Next up at 24% is white wine followed by sparkling at a staggering 66% of the country’s wine production. More than 50% of the grapes produced in England are Chardonnay, Pinot Noir, and Pinot Meunier used to make sparkling wines. Interestingly, these are the same grapes that are used to create Champagne, too.

One of the best ways to explain English sparkling wine to someone learning about it for the first time is by describing its similarities to Champagne. England and the Champagne region have very similar climates, with England being just slightly cooler. As global warming is starting to play a big part in agriculture, it is expected that warmer weather will result in better quality English grapes. While Champagne is on in danger of becoming too hot (as happened in 2003 and 2009), England is could be about to hit the ‘sweet spot’.

The terroir is also very similar between Champagne and major English sparkling wine regions in southern England like Kent, East Sussex, and Hampshire. A layer of chalk beneath the English Channel has a great impact on vine growth and distinct qualities of the grapes in both areas.

Given these similarities and the fact that that both Champagne and English sparkling wines are produced from Chardonnay, Pinot Noir, and Pinot Meunier, it’s not hard to see why so many comparisons can be made.

I’d like you to answer this question in your mind: How many bottles of English wine do you think are produced each year?

Sadly, English wines still only count for less than 1% of the total wine purchases in the country itself; they are still quite small compared to import, but they’re growing. It’s estimated that by 2017, English sparkling wines will equate to 1/8th of the amount of Champagne brought into the country.

Although each producer has their own distinct tasting notes, English sparkling wines do have their common traits. On the nose, you can typically expect a toasted caramel brioche aroma with hints of apple, pear, apricot, and candied almonds. The taste, similar to Champagne (given the identical production method), offers a clean, crisp and refreshing acidity with a candied brioche finish.

The Future of English Sparkling Wine

For now, it seems that the vast majority of English sparkling wines remain within England, with only 5% (around 250,000 bottles) being exported. By 2020, this is expected that will rise to 25% (around 2.5 million bottles) due to increased production and global demand. The English Wine Producers have been making a significant effort to ramp up international exposure to continue to get this English gem in front of wine lovers across the globe.

For those of you who are constantly on the search to try something new, my advice would be to snap up the first bottle of English sparkling wine you can get your hands on. Check Vivino’s top 25 list, and see which ones are available in your country. If you love sophisticated bubbles, you won’t be disappointed!

Author: Adrian Smith is a wine journalist and global traveller on a mission to help everyone find their own unique wine passion. He’s Vivino’s UK Ambassador and the Editor in Chief of Drink Me Magazine. To read more of his Vivino wine guides and a whole lotta’ wine know-how click here to check out his other stories.