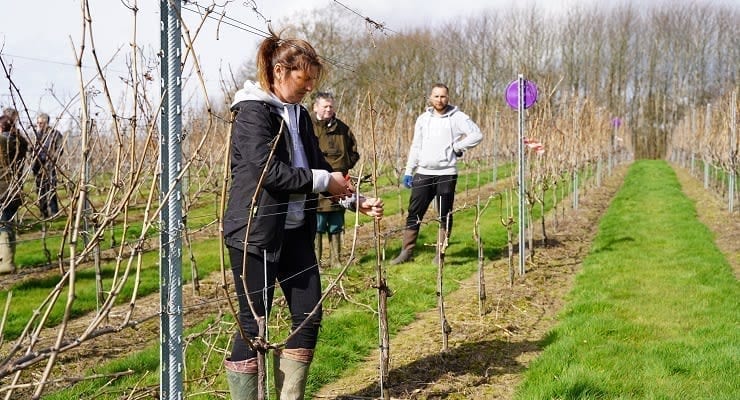 In the first of its kind in the UK, 12 teams of vineyard technicians from leading producers in the South East of England battled it out to win the title of Vine Pruner of the Year.  The competition also attracted a good number of supporters from the vineyards to cheer their teams on.

After a competitive battle, the ‘Champion Team Trophy’ was awarded to Davenport Vineyards, based in Sussex, with runners up from Gusbourne (Kent) and Vine Works (vineyard consultants) who all received prizes.

The event may be the first of its kind to take place in the UK, but follows a tradition found in many other major wine growing regions around the world. The competition was supported by hosts Hush Heath Estate in Kent and sponsors Felco (leading secateurs manufacturers) supported by N.P Seymour, vineyard equipment manufacturers and suppliers Gripple and leading vineyard post suppliers Hadley Posts. Bedlam Brewery also provided well-deserved beer to participants at the end of the competition

Each competing team was given a single bay of vines to prune and tie down, and judged for proficiency, accuracy and speed in the process.

“We wanted to show that whilst its winemakers that usually get all the glory and are the ‘rock stars’ of the wine world, it’s the ‘roadies’ that supply the grapes. No grapes, no wine; great grapes, great wine,” commented Stephen Skelton MW, one of the judges and Chair of the UK wine industry’s Viticultural Advisory Group.

He added: “Pruning is the most important vineyard task in the year and for the quality of the coming harvest and the longevity of the vines, it has to be done correctly and efficiently.”

The event was organised by James Dodson of Vine Works, viticultural consultants to the UK wine industry and Tony Purdie of Yotes Court Vineyard in Kent. Tony commented: From an organisers point of view I was really impressed with the enthusiasm shown by all the contestants. There was a great mix of managers, full time vineyard staff and contractors all pitting their skills against their opposing teams. We were trying to ignite a friendly competition between rival companies in the pursuit of recognition and affirmation that pruning is a technical skill and an immensely important element in the pursuit of quality wines and healthy vineyards.”

It might have looked easy, but I bet if you asked the contestants, even those with years of experience, pruning in a competition is quite intimidating especially with onlookers and judges ready to critique your work,” Tony added.