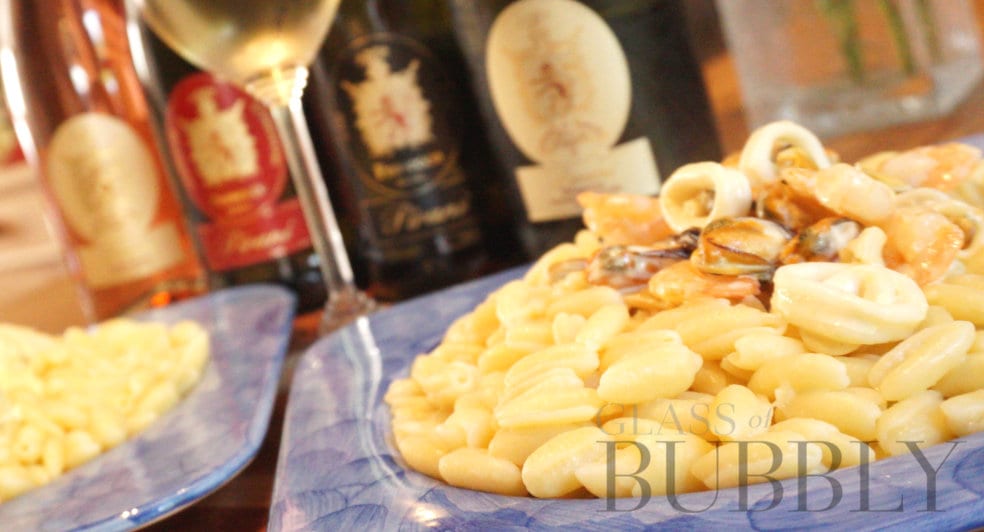 It’s an easy combination, not much in preparation time and neither in costs, simple and easy to do that we can all do this pairing at home without thinking – It’s Prosecco and pasta.

Pasta, dating back to 1271, if the discovery in the XIII Century by Marco Polo is to be believed, which then means the origins of this food is from Asia though it has formed an important part of Italian cuisine for centuries now. You ask ‘name something that reminds you of Italy‘ to most people and pasta will be the response alongside pizza.

Production of pasta in Italy remains at high levels though of recent years its global supremacy is slightly down with figures now at around 3 million tonnes annually. There are over 400 varieties of pasta that we can choose from such as the likes of shells, strands, sheets, different flavours and colours. The two main styles of pasta are fresh (fresca) and the dried version many will be familiar with (secca).

Once again figures are showing slight falls of recent years, though the average person will consume around 90-100 grams of pasta per week in the UK. Surveys show that the most popular pasta dishes for us here include the family favourites such as spaghetti bolognese and lasagne. Another favourite from Italy, now in the world of wine, is of course Prosecco which well over 100 million bottles are exported to and enjoyed in the UK. In recent years the trend in choosing Prosecco has grown considerably (though said to have peaked in the last year) and this fizzy wine from Italy has crept up to and surpassed sales of Champagne thanks to its easy drinking fruity flavours and lower price point. Styles of Prosecco vary from sweeter versions (extra dry) to lesser sugar options such as extra brut, you can also opt for varied quality levels from standard DOC to the finer flavours offered from DOCG and above. An interesting fact about Prosecco, a mistake that many make, is that there are no rosé labels as the wine is made primarily from a white grape (Glera Prosecco).

Now that we have introduced two famous names from the world of food and drink of Italy, let us see how they pair up together thanks to recent samples sent to us from Agnesi (Pasta) and Pirani (Prosecco).

We prepared two easy to cook pasta dishes and paired them with the sweeter label from Pirani Prosecco, the extra Dry: Gnocchetti Pasta from Agnesi with chicken in cream sauce paired with Pirani Prosecco Extra Dry: “Balances well. A creamy sauce attack followed by a fresh and invigorating fruity explosion from the Prosecco which leaves subtle green fruit flavours in the palate and cleanses well.” Gnocchetti Pasta from Agnesi with seafood mix in cream (added Prosecco whilst cooking) paired with Pirani Prosecco Extra Dry: “The Prosecco is more effective here at neutralising flavours and leaves a zingy taste sensation in the palate.“